Othogg is an animated short about a caveman that mistakenly relieves himself on a sleeping Tyrannosaurs.  Obviously pissed, the T-Rex chases after the half witted cave dweller.  As the pursuit reaches its climax when Othogg the caveman ducks into a cave with an opening too small for the T-Rex.  Thinking his troubles are over, Othogg breathes a sigh of relief.  Has Othogg escaped certain doom!  Or are his troubles just beginning?

This animated short was the product of several students participating in an animation production class at the Art Institute of California in Orange County.  We all pitched our own ideas for the short and then voted on the best one.  Othogg won the vote.  We began working out the details, story points and character designs.  Once we were happy with our character designs and the flow of the story I drew out the storyboards. 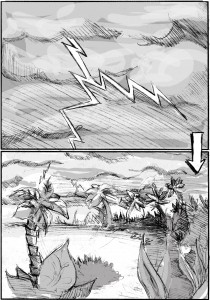 A dark and stormy night filled with lighting, howling winds and a torrential downpour sets the mood for our stoic main character, Othogg.  The hardened caveman is unaffected by abrasive weather and gaily strolls through the lush prehistoric jungle. 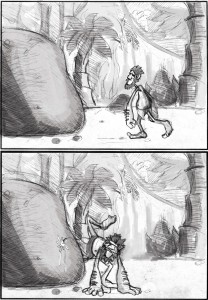 After a long day of contemplating life and its meaning, our meandering caveman feels the need to pee.   He strolls up to his favorite rock and hunkers down to relieve himself.  It is a well known fact that no position is more comfortable that getting down on all fours and hiking up a leg to relieve yourself.  So that’s just what Othogg does. 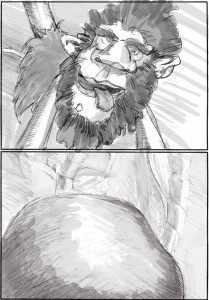 Thoroughly enjoying the long awaited relief, Othogg is completely unaware of the low grumbling coming from his rock of choice. 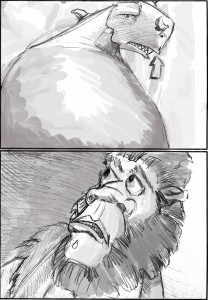 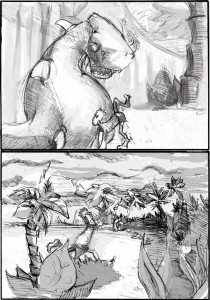 Unfortunately for Othogg he has mistaken a sleeping Tyrannosaurs for a rock and has now awakened it.  With a loud roar the T-Rex lets Othogg know that he is very displeased with the current state of events.  Without delay our nimble yet dimwitted caveman  speeds away. 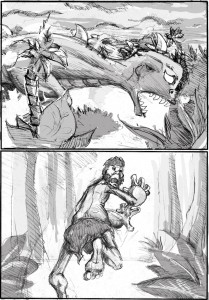 With the T-Rex closing in, Othogg is in a panic trying to figure out how he is going to survive this.  There is no apologizing to a flesh eating angry dinosaur that would eat you even if it wasn’t mad.  The odds of surviving this are not looking good. 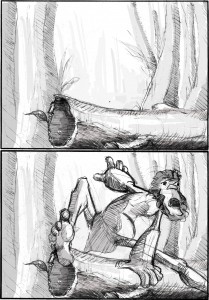 “Who the hell put this log here!  Can’t you see I’m running for my life!” Fumed Othogg as he hop frogs over the fallen tree. 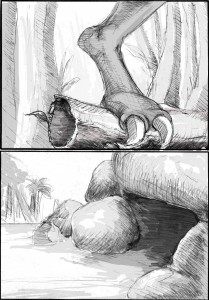 With the T-Rex in close pursuit, Othogg is elated to finally see a way out.  There is a cave in sight and he just might be able to make it. 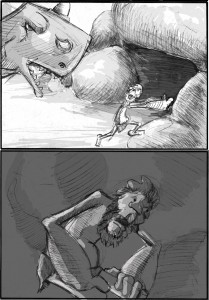 Almost there…Made it.  Breathing heavily yet alive Othogg take the moment to catch his breath. 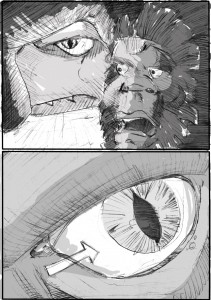 Yikes!  That’s still too close for comfort. Othogg runs further into the cave. 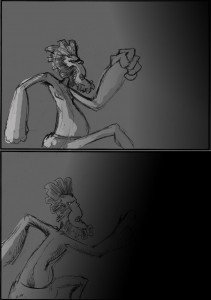 The T-Rex’s loud roar echoes thought the cave pushing Othogg to run deeper into the darkness. 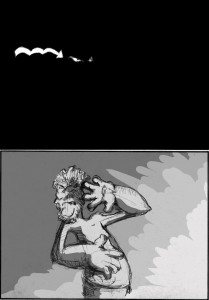 Just as it begins to get too dark to see anything a blinding light sparks up. Othogg covers his eyes to shield them from the overpowering light. 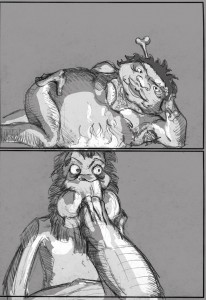 Othogg’s sight adjusts to the light a beautiful sexy woman lounging seductively by a campfire.  Wait!  Scratch that she’s hideous.  Is that a moustache? 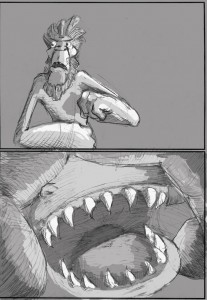 Well that’s not going to work.  How do I get out of here?  Oh yeah, the T-Rex is still there… 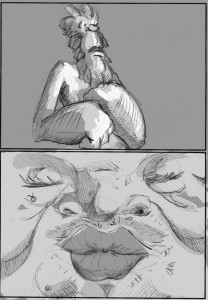 …and she is over there.  What to do, what to do?  Othogg weighs the situation that he is in.  Certain doom at the cave’s entrance or prolonged agony in the cave.  Just then the upsettingly exotic cave woman puckers up and… 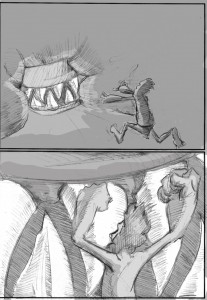 …Let me out of here!  Othogg runs for the cave entrance and a quick death.  He pounds on the T-Rex’s teeth.  Let me in! 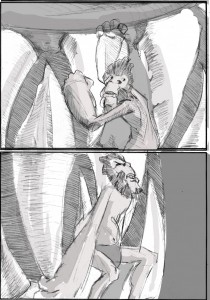 Let me in!  Oh, no she’s coming.  Othogg panics and grabs the T-Rex’s teeth and prys open its mouth. 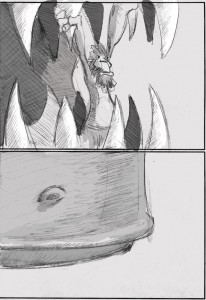 Othogg steps inside the T-Rex’s mouth the closes himself inside.  A free, yet dead man.  Rest in peace Othogg.